Recently sacked Bayelsa state governor-elect, David Lyon, has issued a statement in reaction to the Supreme Court’s judgement, that annulled his election that took place back in 2019.

Vanguard reports that Lyon while speaking at a news conference in Yenagoa rejected the apex court’s ruling and called it a procured judgement. The APC candidate who was represented by Preye Oseke who represents Southern Ijaw federal constituency said the judgement did not reflect the wish of the people.

The sacked governor-elect went on to demand that the INEC should not issue a certificate of return to Senator Douye Diri of the PDP. 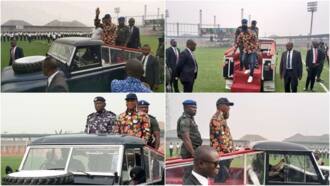 He said: “We are in shock. We as a party and as people of Bayelsa are rejecting the judgement completely. It is a procured judgement. While we have our respect for the revered justices, we believe that this is not the wish of Bayelsans.

Again, we are calling on the Independent National Electoral Commission not to issue a certificate of return to the candidate of the PDP because he was unable to score the required 25 percent in two-thirds of the local government areas.

As a party, we are law-abiding, our properties have been destroyed even in the midst of the judgement that came this morning. We are calling on all our supporters to remain calm while our leaders and stakeholders meet and come up with the next line of action. We believe the right thing will be done. The rule of law will be upheld.”

Meanwhile, Legit.ng previously reported that the national chairman of the APC has hinted that the party may file for the review of the Supreme Court judgment which sacked its candidate as the governor-elect of Bayelsa state.

In his official reaction to the ruling of the apex court, Oshiomhole said the party has already consulted its lawyers on the possible action to take to ensure the Lyon’s mandate is restored.

Oshiomhole further told newsmen that the “judgement lacks the fruits of justice” and that the verdict was based on mere technicalities which portend “danger to our democracy.

In a related development, special assistant to the president, Lauretta Onochie, reacted to the Supreme Court’s judgement that sacked the former governor-elect of the Bayelsa state, David Lyon.

The presidential aide, in a statement posted on her Facebook page, said the screening organ of the ruling APC should be blamed for the loss the party suffered in Bayelsa state.