– A senior advocate and educationist, Aare Afe Babalola, has said that any attempt by the federal government to destroy Amotekun will not work

– Babalola, therefore, called on the government to accept the project as a good response to the security need of the southwestern region

Aare Afe Babalola, a senior advocate of Nigeria, on Sunday, January 19, said that any move by the federal government to destroy the southwest security initiative, Amotekun, will not work.

The legal luminary added that the security project is very much legal according to the 1999 constitution of the federal republic of Nigeria, The Nation reports.

The owner of the Afe Babalola University, Ado-Ekiti, also said that the southwest governors have not done anything illegal bringing up the initiative, saying that they have only responded to the desire of the region on security. Babalola said that the special operation project is a good solution to the insecurities that have been ravaging the region in the past. 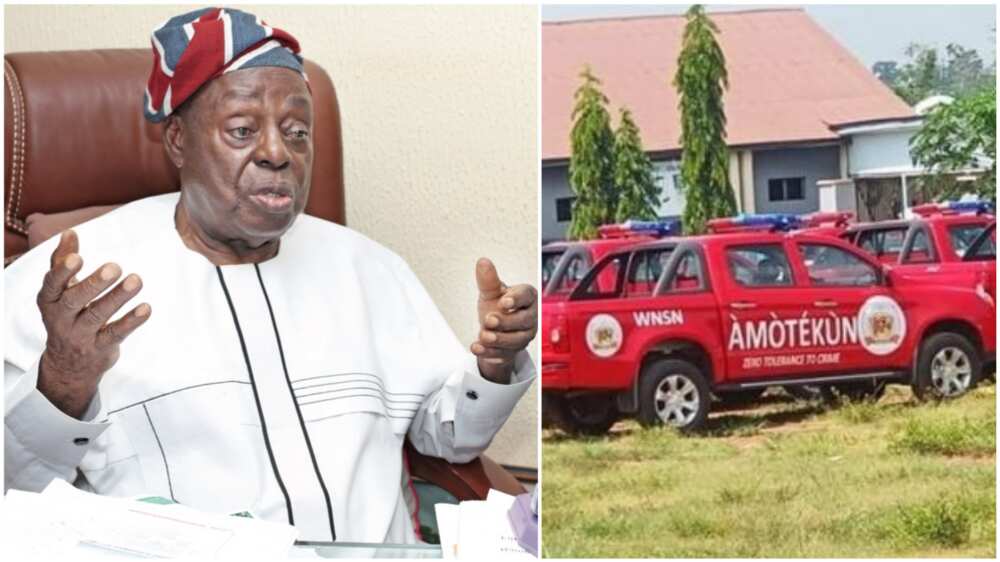 Babalola said that there is nothing wrong with the project and that the federal governor should support it. Photo source: The Nation
Source: UGC

He said that while the attorney-general of the federation, Abunakar Malami, supported the illegality of the scheme with Article 45 of the constitution, he forgot other sections like 24 and 40 that give clear responsibility on security to the citizens.

“The Amotekun outfit is a protective and supportive outfit established by the governors of the Southwest. It has its roots in the 1999 Constitution and the previous constitutions before it – 1960, 1963.

“Section 24 of the constitution provides that ‘it shall be the duty of every citizen to make positive and useful contribution to the advancement, progress and well-being of the community where he resides’. Well-being means security of life and property etc,” he said.

It said rather than looking for a way to kill the project, the federal government should embrace it and applaud those who came up with the initiative. “If this outfit had been established about 10 years ago, we would not have these issue of kidnapping, killing and other security challenges. we won’t have those who go to the farms to kill people because they would be fished out. That is why the constitution says that such outfit should report to the police.

“What I have just said is that it is to support the police, support the government in their duty to ensure that there is peace, there is safety of property, safety of lives. It is a good idea. It is belated but it is lawful and constitution,” he said

Meanwhile, Legit.ng earlier reported that Balarabe Musa, an elder statesman and former governor of old Kaduna state, alleged that the southwest governors established the new security outfit – Operation Amotekun Initiative, in the region as a precursor for the creation Oduduwa Republic.

Your move against Amotekun must fail – NANS tells FG