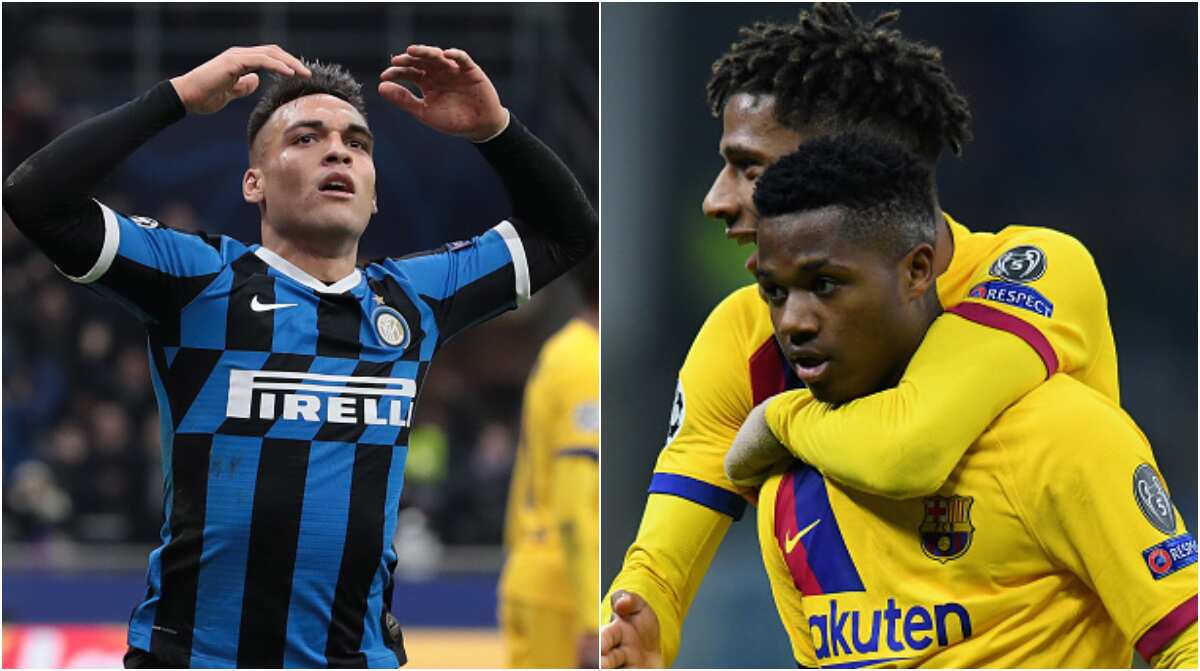 Inter Milan vs Barcelona ended 2-1 in favour of the Spanish giants as Antonio Conte’s side crashed out of the Champions League.

Lionel Messi and Sergio Busquets were rested for the fixture as the Spanish champions had already qualified for the next round prior to the match.

It took 23 minutes for La Blaugrana to take the lead through academy graduate Carles Perez as Luis Suarez controlled a fine pass from Antoine Griezmann into the path of the youngster as he put ball in the back of the net to make it 1-0.

But just before half time the Neazzurri responded as Lautaro Martinez held off Jean-Clair Todibo to create space for Romelu Lukaku to shoot for the equalizer. 1-1 it was before the break.

But with three minutes left on the clock, Antsu-Fati played a brilliant one-two with Suarez as he unleashed a belter from outside the 18-yard box to make 2-1 as Barcelona won the game.

In the other game at Signa Iguna Park, Borussia Dortmund ensured their passage into the next round following 2-1 win over Czech side Slavia Prague.

England international Jadon Sancho put the Yellow Canneries ahead with the help of German striker Marco Reus to make it 1-0.

Slavia Prague leveled matters through Tomas Soucek two minutes before the break as the match was even 1-1 at half time.

The decisive goal came a minute after the hour mark as Sancho turned provider for Julian Brandt to score the match-winner as it ended 2-1 in favour of Dortmund.

Barcelona topped Group F with 14 points from six matches as Dortmund picked second spot with ten points from the same number of matches.

Inter Milan will play in the Europa League round of 32 after failing to secure their passage into the round of 16 as Slavia Prague crash out of the tournament.

Meanwhile, Legit.ng had earlier reported that Aaron Wan-Bisakka has so far been Manchester United’s best defender in training as he is yet to be beaten by his teammates.

The England international won the man-of-the-match award in the Manchester derby after stopping Raheem Sterling on several occasions.